A celebratory seminar was held in honour of Geoffrey Samuel, hosted by the Kent Law School in Paris on 2 December 2016. It took various themes from legal reasoning. Among the contributions were papers from Pierre Legrand, François Ost and Pietro Monateri. 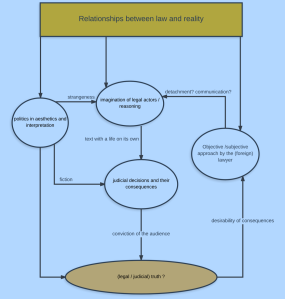 PIERRE LEGRAND gave a major paper in which he examined claims to objectivity and truth in comparative law. In his view, any foreign lawyer examining another system necessarily has his/her particular interests and brings to bear his/her personality and prior experience. In the light of this, any presentation of a foreign system will be personal and distinctive. This set of pre-understandings shapes the comparative enquiry. As a result, the researcher can only offer interpretations of a foreign system.

This contrasts with the emphasis on objective attachment as part of scientific enquiry found in a number of German comparative law works. These suggest that the researcher can identify the objective facts about the law in another legal system if s/he simply gets out of the way. For Legrand, that sort of total detachment is both impossible and fails to reflect how we come to learn about another system. The researcher brings all her positive skills (not least her linguistic skills) to facilitate the understanding of the law which she communicates to others. That personal character of the comparative endeavour raises questions about the character of objectivity to which the comparativist can lay claim. So, can a comparative lawyer lay claim to present a ‘true’ picture? Legrand suggests the unavoidable personal character of an interpretation precludes a claim to ‘the truth’. Others in lively discussion took the view that a presentation from a helpful perspective could be a claim to ‘truth’, even if it were accepted that there could be more than one version of the truth.

FRANÇOIS OST examined the place of the case in legal reasoning. At least in many languages, the ‘case’ does not have a significant place in accounts of legal reasoning. One talks of the ‘rule’ and its ‘application’, but not of the case which fills the gap in-between. The hypothetical case (cas de figure) plays an important role often in testing ideas. But there is an important feature missed in most analyses which is the way in which the rule and the case have to be held together, such that the rule may be reformulated in the light of the case in which it is called to be applied. (This is what happens in common law distinguishing.)

What is the specificity of reasoning in a concrete situation? The case may well fall outside the rule and so the rule needs rethinking. The case may stimulate the imagination. It encourages greater depth of thinking about the purpose of the legal rule. The personal stimulus gets between the objectivity of the law and the subjectivity of the decision-maker. It provides a third position between the objectivity of the law and the ‘taste’ or subjectivity of the judge. It enables the personal judgment of the judge to have universalist pretensions. Rather like in aesthetics, there can be a judgment which makes sense of a value-judgment in a concrete application and can be shared – it does not remain purely subjective. As in Kant’s ideas on aesthetics, there is an opening to universalism. Precedents then can have an appeal to be followed because they instantiate the universal value.

Fiction and hypothetical cases can stimulate the imagination by encouraging thinking outside the box. Raising consciousness and a focus on the concrete are important in training and in teaching to bring out the essential ideas of a problem. It also encourages consistency in the solution of problems.

A focus on the case does not mean that we give up on universalism, but it recognises that we pursue a contextualised universalism (l’universalisme contextual). We recognise that each people has its own version of justice which draws on its experience. Justice is a universal project with distinct manifestations which share a family resemblance. Dialogue between judges of different countries, often spontaneous, enables a discussion on how to bridge the gap between the claims of law and specific cultures.

MAKS DEL MAR focused on the place of supposing and imagination in legal reasoning. Supposing encourages a sense of strangeness and makes present as tentative a particular suggested solution, but it encourages participation in engaging with its correctness. It allows for experimentalism and copes with degrees of complexity. Del Mar argues that image processing can give us an insight into how supposition and hypotheticals work. If image processing is part of imagination, then it allows us to select and abstract specific features or even to present what is physically impossible to conceive in order to accentuate certain features of a problem. It allows perspective-taking in which the audience is encouraged to participate. Fiction can serve a similar function. By temporarily suspending certain operative facts, we are led to suppose what a solution could be like. It enriches the imagination and enables us to reach more appropriate substantive conclusions

PASCAL PICHONNAZ distinguished between the case as an event and the case as a routine application of a rule. In the latter, there is more of a sense that the solution is contained in advance in the rule. But it is important to note the different ways in which a rule is understood and articulated, not only by judges. Office handbooks or benchbooks are ways in which officials and judges practically understand the law (these are the interpretations maison). Circulars perform a similar function when produced by hierarchical superiors to other administrations or to citizens. There is a dialogue between the abstract rule and these specific and necessary specific understandings.

In relation to the case as event, there is a question of what is justice in the face of an individual dossier or litigant. How far does the rule provide the whole of the solution? In these sorts of case, it might be useful to have dissenting opinions to demonstrate the range of permissible responses of the law.

FRANZ WERRO looked at the pragmatist pluralist method in the application of art. 1 (3) of the Swiss Civil Code which permits the judge to resolve cases where there is no specific rule in the light of what he would do as legislator. Whereas in 1907, Huber was trying to move away from the école de l’exégèse, after 1945 and stress the inevitability of judicial creativity, the emphasis after 1945 was on the limited role of judges who were meant to discover the intentions of the legislator, even if these were imperfectly represented in the text. Huber wanted the courts to be inspired by doctrinal writing and to be interdisciplinary, but doctrinal writing limited itself for a time later in the 20th century.

Contemporary Swiss scholarship has taken a different turn. The text is not seen as a secondary expression of the legislator’s thought, but a primary product. That requires political and other dimensions to be brought in so as to understand the text. The judge becomes the intermediary between political power and other actors involved in the interpretation and creation of law. The court is likely to involve the “spirit of the time” rather than the views of the historic legislator.  There is thus a change of approach in reading the same text over time.

PIETRO MONATERI took the way a specific text (Digest XIV, II,9: “ego quidem mundi dominus: lex autem maris) to show how the law can be used in different periods for very different purposes. He spent much time explaining the original meaning of the Greek text which went back to Antoninus Pius in the second century who was applying Rhodian law, unless a specific rule applied. Using evidence from inscriptions on monuments, the claims of the emperor at the time were to be understood as an exaggerated claim to legitimacy as the manifestation of the gods. In the early medieval period, Martinus used it to suggest that eminent domain vested in the Emperor and this gave him title to impose taxes on all feudal inferiors. Bartolus said that the emperor had general property, but this did not deny the specific property rights of private individuals. Later Selden and Mommsen made the emperor the owner of the law and the sea. Hobbes reinterpreted it in the sense of legitimacy of the sovereign.

The illustration shows the way the text takes on a life of its own.

HORATIA MUIR-WATT talked about mapping schemes of arguments and how they move from one discipline to another. She illustrated this by comparing epistemology and aesthetics. Different theories of knowledge help to reveal the kind of knowledge that people have. Aesthetics, dynamism and perspectivism offer different political perspectives which lead to different choices. The legal method can be used to shed light on a social problem: how society looks at a problem is seen by the way in which the law regulates or attempts to regulate it.

JOHN BELL gave a paper on ‘Consequences’ in French and English legal reasoning.  He argued, first, the French judges have a different conception of what is a legal justification. A legal justification is a summary of the rule as interpreted by the court applied to the facts as found by the court. The inevitable creativity and responsibility involved in these judgments does not have to be justified in the decision. The decision functions as a clear statement of the law which lower courts can follow. Unlike the arguments of the lawyers on each side, or those of the avocat général and the reporter judge, there is no element of persuasion. It is an act of authority. That is a radical difference in the function of a judicial decision from that of the common law.

Secondly, the French doctrinal community share with the judges a narrow conception of what is a legal argument. Although legal scholars may acknowledge the place of arguments from consequences and dialectic in the deliberations of judges and lawyers, they do not feature as legal arguments. The books on legal methodology are replete with pages on interpretation, especially logical interpretation. But they simply do not ask questions about these other features which actually do have a major part in determining the premises on which the legal syllogism is built. The conception of legality turns on the interpretation and application of the legal text.

Thirdly, the French system shares with others the predominance of legalistic and justice-based arguments in determining what the law is. Arguments of social consequences, if they arise, are not at large. They are confined to a dominant narrative which involves integrating the instant case and its proposed solution consistently and coherently into a doctrinal framework. When a lawyer presents a legal argument, he or she presents it as potentially fitting as a dogmatic proposition. Such a proposition can be found as a logical or inherent consequence of the established rule itself. More commonly, the dogmatic argument extends the established idea and then it has to be subjected to testing. Hence Alexy sets as a rule of legal argumentation “Every dogmatic proposition must be justified by recourse to at least one general practical argument whenever it is subjected to doubt.” We do not have to argue everything from scratch, we can develop incrementally and so save ourselves time. Lawyers use dogmatics whenever they can, though they recognise these as provisional. So the argument about consequences is not free floating, but is part of a debate on the development of legal doctrine. The best way forward involves not only looking at the fit of rules, but also the desirability of consequences within that set of rules.