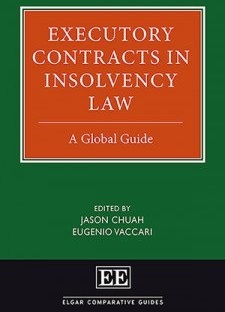 The book Executory Contracts in Insolvency Law: A Global Guide (published by Edward Elgar and edited by myself and Professor Jason Chuah, the Head of the Law School at City, University of London) is made up of a peer-reviewed collection of chapters which set out how the different insolvency law systems considered in the study treat the matter of executory contracts. This book, however, presents a set of features that make it unique to other publications on the same topic.

Other monographs and edited collections have adopted a global approach to the study of executory contracts in insolvency law. However, their purpose has been to provide guidance to practitioners dealing with contracts subject to foreign law. Unlike these books, Executory Contracts in Insolvency questions the desirability of the existing statutory frameworks from both a domestic and a global perspective. The focus of each chapter is on the evolution of contractual practices at global and domestic level, and on whether laws and judiciaries are keeping pace with it. The analysis of the laws in the books is fundamental to their theoretical criticism.

The chapters are grouped on the basis of the legal families to which each system loosely belongs, namely civil law, common law and hybrid systems.

Firstly, after a general, introductory outline on the limits on assuming or disclaiming executory obligations, each chapter critically analyses the implications of the existing discipline of the treatment of executory contracts in insolvency. The roles of the judiciary, the powers to enforce ipso facto stipulations and to assign executory contracts are investigated from a domestic and a cross-border perspective.

Secondly, the introductory chapter offers a comparative analysis of the effectiveness of the different solutions enacted at domestic level to preserve value in insolvency. It draws examples from the judicialised approaches that characterise common law jurisdictions and the regulatory-heavy methods followed in civil law systems to identify common patterns in the treatment of executory obligations around the globe and in suggesting recommendations for regulatory reforms.

Executory Contracts in Insolvency Law offers a unique, comprehensive, and up-to-date transnational study of the topic, including an analysis of certain countries which have never previously been undertaken in English. Written by experts in the field with extensive practical and theoretical knowledge of both research and professional experience, this is a ground-breaking investigation into the philosophies and rationales behind the different policy choices adopted and implemented by a range of over 30 jurisdictions across the globe.

With contributions from more than 40 insolvency law experts, this book provides extensive coverage on executory contracts, encompassing both developed and developing countries, and drawing on not only so-called common and civil law systems, but also, countries with hybrid systems of law. The book explores ipso facto clauses and improvements that could be made, as well as casting light on procedural and tactical issues and considerations when attempting to address executory contracts in different jurisdictions.

Providing a globalised and comparative perspective on executory contracts in insolvency law, this book is an invaluable tool for legal practitioners requiring a cross border perspective on the subject, as well as for academics and researchers pursuing a study of the topic. It also benefits policy makers and institutions seeking to introduce insolvency law reforms in their home countries.