The history of law is a promising domain. A number of legal disciplines, such as legal theory, the philosophy of law, the sociology of law and epistemology do not have their own history. Often they are perceived as elements of an immutable and coherent system of legal knowledge divided into branches, and not as projects – competitive and contradictory – within the framework of types of thought limited in time and space. Representatives of each of these disciplines make claims in various forms to primacy and priority over the others, rendering them to the specific identities of their own project, its competitive advantages and limitations, disciplinary boundaries, and evolutionary path.

The present study of the history of comparative-legal studies (COMPARATIVE LEGAL STUDIES: 1750 TO 1835. APPROACHES TO CONCEPTUALIZATION, Translated and Edited by W.E. Butler. London: Wildy, Simmonds & Hill Publishing, 2019, 755 p.) began nearly two decades ago. This project identified several problems, including: the different perception of disciplinary affiliation of comparative legal studies and, accordingly, a different subject-matter of studies devoted to their evolution; the lack of fundamental generalizations and the presence only of small studies; the “renvoi character” of some studies with regard to others in which the chain of reference may be traced through several works; an inadequate knowledge of the sources, or simply ignoring them; reliance on completely different materials, depending on the scholar’s affiliation to a certain country; elements of nationalism, primarily ignoring materials in languages foreign to the researcher; the descriptiveness and the lack or weakness of generalizations except for determining facts; an orientation towards deeply formal, secondary indicators – for example, the period of the emergence of specialized chairs, societies, journals, holding of congresses.

The substantive breakthrough in investigating the history of comparative legal studies may, in our view, be linked with recourse to sources, their introduction into scholarship, and a thoughtful reworking. This has enabled them to be cleansed of layers of references, stereotypes removed, and scientific generalizations to be expanded. In recent times the greatest achievements belong to Mohnhaupt, and to J. Bentivegna, who brought to the public Amari’s work on comparative legislation (originally written in 1845) and on a critique and history of the science of comparative legislation (first published in 1857).

The present writer brought to light a complex of UNESCO documents connected with the creation and activities of the International Committee of Comparative Law – International Association of Legal Sciences; some of René David’s unpublished works (1906-1995) were translated and published. Finally, publication on the Internet, especially Google Books, contain a large body of works by legal scholars, including rare publications never before considered when investigating the history of comparative jurisprudence.

This all gives grounds for a substantive review of the evolution of theoretical foundations for comparative-legal studies. It also expands significantly the problem and makes it impossible to consider them all within a single work. Therefore, the chronological framework of the present study is limited to the second half of the 18th century to the first third of the 19th century. This period especially requires consideration, for it was the first time that comparison in law was conceptualized, the comparative legal scientific picture of the world was formed, and the origin of comparative-legal scientific disciplines occurred.

The chronological framework was not chosen accidentally. The lower limit was especially linked with Charles de Montesquieu’s publication (1689-1755), L’Esprit des loix, which furthered the birth of comparative-legal thought, along with the beginning of the scientific school of Johann Stephan Putter (1725-1807) at Göttingen University which, 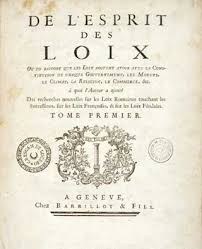 inter alia, singled out a purely legal problem from comparative State science (comparative statistics) and cameralistics. The outer limit is connected with the principle of reasonable sufficiency – the forming of the comparativist scientific picture of the world was completed, the role of comparison in law, and also of comparative-legal disciplines, was generalized, and the institutionalization of comparative-legal studies occurred (journals, chairs, etc.) in the first third of the 19th century. This also was a time of active dissemination of the idea of the comparative study of law beyond the initial Central European area, the crisis of the primary comparativist paradigm of the nation as the exclusive social totality (the schism among the Hegelians after the death of Hegel is connected with this). Moreover, this was a time of transition from early positivism in law to an approach known as legal positivism. That is, we sought to reconstruct the primary theoretical foundations of comparative-legal studies and dwell on them, leaving later transformations for further research.

The theoretical foundations of comparative-legal studies were formed gradually within the context of the developing legal science at the time. This was the time of the bankruptcy of the metaphysical grounds of jurisprudence and principal universalist legal ideologies, the development of national-State legal orders in Europe, and also the influence of the development of comparative knowledge within other sciences. During the period considered, pluralism became part of comparative knowledge and instructional disciplines – comparative jurisprudence, comparative history of law, branch comparative-legal disciplines. Uniform theoretical foundations of obtaining, generalizing, and applying comparative-legal knowledge were characteristic for all of them. The works of the principal scientific schools of that time were mutually reinforcing. At the time, the comparativist scientific picture of the world of law was conceptualized, elements of which were the legal map of the world, doctrine on the Individual, Particular, and Universal in legal development, distinctive and general elements of national legal systems, internal and external interaction in law, and the classification of legal systems. The complexity, subsequent realization, proposed and institutionalized forms of the organization of knowledge testify to the fact that during the second half of the 18th and first third of the 19th centuries the process occurred of the origin of theoretical foundations of comparative-legal studies.

Other books by the same author in English: