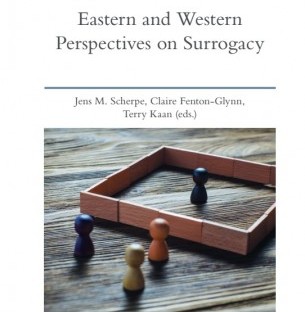 Surrogacy is a complex and topical issue. Defined as an arrangement in which a woman (‘the surrogate mother’) agrees to bear a child and to hand over that child, on birth, to another person(s) (‘the commissioning parent(s)’), it raises numerous legal questions:  the potential commodification of children, the possible exploitation of the surrogate mother, and the autonomy rights of the women concerned.

Jurisdictions worldwide have reacted very differently to surrogacy. Eastern and Western Perspectives on Surrogacy (edited by Jens M. Scherpe, Claire Fenton-Glynn, Terry Kaan) aims to analyse these different reactions, in particular in the context of international surrogacy arrangements, i.e. when potential commissioning parents go abroad to have a child as the result of a surrogacy arrangement. The reasons explaining the emergence of this international market, often described as fertility tourism, are not only legal (overriding the restrictive approach of a jurisdiction) but also practical (finding a surrogate mother more easily). As explained in the introduction, the starting point of the book is the necessity for jurisdictions to admit the existence of this global surrogacy market as a fact.

This book includes international perspectives and comparative analysis drawing on the experience of 21 jurisdictions across the globe. Claire Fenton-Glynn and Jens M. Scherpe have prepared a questionnaire, to ensure that the same areas and questions would be covered for all the jurisdictions. This methodology helps the comparison between the jurisdictions and gives a genuine coherence to the book. The explanations and comments advanced by academics and judges from all over the world ensure that this book delivers a comprehensive comparative analysis of the law on surrogacy. It provides deep and detailed analysis related to the law concerning surrogacy on a domestic level (which is often a recent law and sometimes a proposed law), as well as to the recognition of international surrogacy, i.e. the recognition of legal parenthood acquired through surrogacy undertaken in another country. As such, it provides a rich basis for academic and practical reflection in the area of surrogacy. This book is divided into three parts: Part I is devoted to the ‘Western perspectives’, Part II explores the ‘Eastern perspectives’, Part III is a comparative analysis.

Part I focuses on 13 Western jurisdictions: France (Walter Pintens), Germany (two contributions, one from Anatol Dutta, and a judicial perspective given by Frank Klinkhammer), Spain (Esther Farnós Amorós), Australia (Mary Keyes and John Pascoe, the latter for “a view from the Bench”), England and Wales (Claire Fenton-Glynn, and a judicial perspective given by Sir Mark Hedley), Greece (Eleni Zervogianni), (Olga A. Khazova), United States of America (Naomi Cahn and June Carbone). In addition, Part I terminates with an analysis of the influence of the European Court of Human Rights over the Western jurisdictions (Paul Beaumont and Katarina Trimmings).

As surrogacy is a relatively recent phenomenon, some countries are still in a transitory phase and have not yet make a clear or definitive choice about what they wanted. Studying the possible options when it comes to surrogacy (either it is domestic or international surrogacy) may help jurisdictions to make a decision or to reflect on their

Amongst the Western countries, France, Germany and Spain opt for a prohibitive approach. In these countries, surrogacy is seen as a form of commodification of women and children. The dignity of the human body explains that women cannot be treated as “receptacles” and children as “merchandises”. Amongst the Eastern countries, Singapore, Taiwan and China also consider surrogacy as being illegal but for different reasons: these jurisdictions are still thinking about the most appropriate framework to regulate surrogacy.

Australia, England and Hong-Kong adopted a “tolerant” approach: they regulate the effects of surrogacy by considering the transfer of parenthood from the surrogate mother to the commissioning parents. As such, altruistic surrogacy is the only authorised form of surrogacy: any payment to the surrogate, making it a commercial agreement, is illegal.

In contrast to the prohibitive and to the tolerant approaches, Greece, Israel, New Zealand, Portugal, South Africa, and the proposed Iceland law regulate surrogacy before the child’s conception. The reasons to facilitate surrogacy are diverse. For instance, in Israel, the influence of history and religion is striking. The pro-natalist policy and the right to procreation derive from the Jewish law concerning marriage, parenthood and the status of children. Commercial surrogacy is the only permitted form of surrogacy, as altruistic surrogacy could raise doubts about the child’s legal status (as it is likely that the surrogate will be a relative of the commissioning parents). In Greece by comparison, surrogacy is regulated for pure pragmatic reasons. The relevant authorities recognised that surrogacy is a social phenomenon and thought that they would have a better control over surrogacy by implementing domestic regulations.

Some other jurisdictions have chosen a free market model and allow parties to conclude binding and enforceable agreements. California and are two typical examples: they emphasise the right of adult women to assisted reproduction and more broadly the right to parenthood. Previously, Thailand and India also followed this free market model. In India, this legislative approach was influenced by religious considerations: in Hinduism, it is important for infertile couples to find a way to have children in order to complete the end-of-life rituals. In addition, the legislation was also explained by historical aspects and could be perceived as a reaction against the previous anti-natalist policy. However, several international scandals took place in Thailand and India, revealing that in some cases surrogacy was a vehicle for an exploitation of vulnerable women and a commodification of children. In response to these scandals, both countries have recently changed their legislation and now ban commercial surrogacy.

The last category of jurisdictions includes jurisdictions where access to surrogacy is controlled by medical and ethical guidelines, such as Japan and South Korea. These regulations are non-binding and unenforceable. In South Korea, this has been a deliberate choice: as there is no social consensus on surrogacy, ethical guidelines provide eligibility criteria for women acting as surrogates, although they are non-binding and not enforceable. In Japan, the guidelines issued by the Japan Society of Obstetrics and Gynaecology prohibit all forms of surrogacy. Even if these guidelines are respected by almost all the experts in this area, there are a few cases of domestic surrogacy. In addition, some intending parents travel abroad to a jurisdiction where surrogacy is permitted. Despite a need for legislation, Shinichiro Hayakawa notices that ‘it is quite unpredictable whether, when and how surrogacy will be regulated by legislation in Japan’ (p. 447).

Part I and Part II of this book show that countries have replied in very different ways to the quite recent phenomenon of surrogacy and that the influence of the social, religious and legal cultures is considerable to explain their reactions.

The third and final part of this book (“Comparative perspectives on surrogacy”) compares these various systems and provides a critical analysis, where strengths and weaknesses of the diverse approaches are identified. This part examines several complex issues such as legal parenthood and information on origins, and such as the eligibility of the surrogate and the commissioning parents. Claire Fenton-Glynn and Jens M. Scherpe consider that “it would be presumptuous (…) to make general recommendations about the best way to approach surrogacy” (p. 566), as it is a sensitive issue for which solutions are influenced by cultural and social considerations. Moreover, this book sheds light on how law reforms may take shape on the future. Even if the disparity of the approaches explains the difficulty to find an international consensus concerning cross-border surrogacy, Claire Fenton-Glynn and Jens M. Scherpe consider that not regulating surrogacy “obviously does not deal with the issues arising from surrogacy” (p.566). When a jurisdiction chooses to prohibit surrogacy domestically, its leads to a displacement of surrogacy: surrogacy takes place elsewhere, with the risk of the potential exploitation of the women and children involved. Similarly, when a jurisdiction “tolerates” surrogacy, it means that in fact this jurisdiction also tolerates practices of foreign commercial surrogacy in the name of the child’s interests – even if these practices are expressly prohibited by the legislature. In addition, the authors demonstrate that the free market approach lead to a lack of legal protection for the negotiating parties and for the child-to-be. They therefore conclude that some regulation is necessary and advice that five keys considerations should be taken into account: “the need for change” (constant re-evaluation of the current legal framework), “legal certainty”, “effective laws”, “the rights of the child” and “the global marketplace”.

While this conclusion takes into account the existence of the international surrogacy market, another approach could have been to challenge the legality of this market. It is not because surrogacy exists that we should considerate it as inevitable. Indeed, this book opens to reflections on the role of Law in relation to questions such as the dignity of the body, the child’s best interests or the structure of the family.

This clearly written book is an invaluable resource on the subject of surrogacy. It is extremely helpful in prompting reflections in many jurisdictions and is very enjoyable to read. For lawyers, academics, researchers, law reformers, but also for anyone supporting or opposing reform on surrogacy across the globe, Eastern and Western Perspectives on Surrogacy is a required reading.