Based on the presentation made at the IECL (Institute of European and Comparative Law) Lunchtime Seminar Series, Law Faculty, University of Oxford, on 21 January 2020 which, in turn, is based on a paper I’m working on under the probable title of

“Preliminary Agreements and the Duty to Negotiate in Good Faith: Distinctive Features in the International Commercial Context”

In international commercial practice, it is frequent to find preliminary agreements that state, in general or in more detailed terms, that the parties will negotiate in good faith. Although this clause might seem straightforward enough, it can present difficulties in its application. If the fact that the agreement where the clause is inserted into is of a preliminary nature is taken into account, then the difficulties increase. The content of preliminary agreements can vary greatly in practice. In some cases they can be very clear and detailed as to their nature, content and effects. But, in other cases, it can be problematic to determine the nature of the agreement (if it is of a contractual nature) and, consequently, its effects.

National jurisdictions vary in their recognition and enforcement of preliminary agreements. If an international contract is being negotiated between parties belonging to different legal traditions, special care has to be taken into drafting preliminary agreements that include a clause where the parties declare that they will negotiate in good faith.

In general, it is important to take into account differences between the legal systems as to their approaches to what is actually ‘precontractual’ and ‘contractual’.

For civil law countries (Germany, France and Chile, for instance) a clause that indicates that the parties will negotiate in good faith would not be, in principle, problematic in that it would be a reiteration of the duty that the parties are already legally subjected to (§§242, 241(2), 280(1), 311(2)(3) BGB / arts. 1104 and 1112 Cciv / art. 1546 CCivCh). However, some questions arise. Firstly, what would be the function of such a clause? and, following from that, would it affect the available remedies? Indeed, a breach of such a duty, contained in a preliminary agreement, could pose problems as to the available remedies, as there are differences between the contractual and non-contractual regimes.

In common law jurisdictions, there are marked differences between US law and English law.

In the US, recent case law is leaning towards the recognition and enforcement of a duty to negotiate in good faith. But, this duty must be found in the objective intent of the parties to be bound. Legal scholars argue that the remedy should protect the promisee’s reliance; thus, not requiring the parties to agree. An example from the case law where a preliminary agreement, which creates a duty to bargain in good faith, was considered to have been breached was where there was a delay in undertaking a promised investment.

In English law, a contractual analysis is possible if the negotiating parties (i) have reached a level of agreement that could allow a court to find that the contract under negotiation was in fact concluded; or (ii) that they had concluded some form of collateral contract or preliminary agreement. Currently English law provides protection in cases of broken negotiations where a collateral contract was found to be concluded (e.g., Blackpool and Fylde Aero Club Ltd v Blackpool Borough Council). But the possibility of obtaining relief is more uncertain in cases where a preliminary agreement was concluded because its enforceability depends on what type of agreement the courts consider it to be. Examples of binding preliminary agreements are ‘lock-out’ agreements (as long as it is supported by consideration and the ‘lock-out’ is for a defined or definable period of time), and those that regulate which negotiating party will bear the cost of precontractual work done or expenses incurred in case the negotiations should fail (also as long as there is consideration). However, preliminary agreements that ‘lock-in’ the negotiating parties, such as agreements to agree and agreements to negotiate (in good faith) are generally held to be unenforceable for lack of certainty (Courtney & Fairbairn Ltd v Tolaini Brothers (Hotels) Ltd; Walford v Miles). Because English law does not recognise the notion of duties of good faith in the formation of contracts, the notion of a duty to negotiate a contract in good faith has been rejected.

In commercial practice, particularly when transactions of considerable complexity are involved, it is quite frequent that after prolonged negotiations the parties sign an informal document called ‘Preliminary Agreement’, ‘Memorandum of Understanding’, ‘Letter of Intent’ or the like, containing the terms of the agreement so far reached.

The usefulness of these documents is debatable, with some legal scholars (Hwang) arguing that they are not very useful as contracts, but quite useful in that they can help parties signal, organise, attach moral suasion, and build trust; and others (Pannebakker) warning that they can create more financial and legal risks than they prevent.

With regard to the regulation of international commercial contracts, the main text is the 2016 UNIDROIT Principles of International Commercial Contracts (PICC), as several articles of the PICC might be relevant in cases of preliminary agreements, e.g.: art. 2.1.1 (manner of formation), arts. 2.1.2-2.1.12 (arts. on offer and acceptance), art. 2.1.13 (conclusion of contract dependent on agreement on specific matters or in a particular form), art. 2.1.14 (contract with terms deliberately left open), art. 2.1.16 (duty of confidentiality). The focus of this presentation/paper is on art. 2.1.15 (negotiations in bad faith) because it expressly refers to the possibility of international parties entering into a preliminary agreement and expressly undertaking to negotiate in good faith for the conclusion of the final contract. 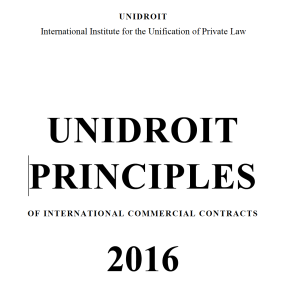 modified and now Official Comment 3 has the title ‘Agreement to negotiate in good faith’. Application of the PICC presupposes the existence of a contract and there are various types of contracts to which art 2.1.15 might apply but, in this situation, the relevant one is where the parties entered into a preliminary agreement to govern their negotiations. In such a case, the contract should include both a choice of law clause designating the PICC as the applicable law and an arbitration clause, as it is this combination that will allow effective application of the PICC to settle a dispute.

According to Illustration 4 to art 2.1.15 and its Official Comment, if two parties have specifically agreed on a duty to negotiate in good faith for the conclusion of the final contract in a preliminary agreement, and one of the parties refuses to continue the negotiations after only preliminary contacts with the other party, remedies for breach of contract are available.

In general, under art. 2.1.15, where liability arises, it is limited to the compensation of the losses caused to the other party and these include the expenses incurred in the negotiations and the lost opportunity to conclude another contract with a third person (ie., the reliance or negative interest). The aggrieved party may generally not recover the profit which would have resulted had the original contract been concluded (expectation or positive interest). But, if the parties have specifically agreed on a duty to negotiate in good faith, all appropriate remedies for non-performance will be available, including the right to performance (such as by directing the parties to negotiate) and other remedies reflecting the expectation or positive interest (to the extent that the requirements for such remedies can be demonstrated). Therefore, this seems like a powerful reason for negotiating parties to expressly agree to negotiate in good faith.

This advantage, in terms of available benefits, was already present in the 2004 edition of the PICC, but it became even clearer in the 2016 edition in that: (i) the Official Comments now establish this within a specific section on ‘Agreement to negotiate in good faith’; (ii) now the Official Comments indicate what an agreed-upon duty to negotiate in good faith means: ‘at the least, a duty to negotiate (or re-negotiate) seriously with an intent to conclude an agreement, but not that an agreement must be reached’, (iii) they also clarify that this duty does not displace other duties under the PICC (eg., art. 1.8 on inconsistent behaviour and art. 2.1.16 on the duty of confidentiality); and (iv) they indicate that in the case of a complex long-term contract, parties who agree on a duty to negotiate in good faith may wish to define further that duty in light of the nature of the contract and its commercial context (e.g., they may set standards of confidentiality, agree on a timetable for the negotiation, etc.). 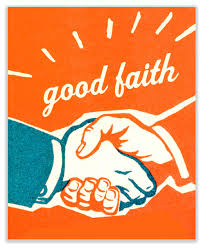 A second problem pertains to the applicability of the remedies for breach of the express duty to negotiate in good faith. Assuming that the parties have undertaken this duty as part of a preliminary agreement, it makes sense for the breach of this duty to give rise to remedies for breach of contract, as this would be a case of contractual rather than precontractual liability. Accordingly, in these situations, the positive interest can, in theory, be compensated under art 7.4.2 (which provides for full compensation). However, the compensation of this interest in these cases is debatable, as it is difficult to argue why the positive interest should be protected where agreement on the negotiated contract has not yet been reached and, for the same reason, it would also be difficult to measure the extent of this interest. As to the right to request performance of the obligation to negotiate in good faith, this remedy would also be available in cases where the parties have expressly agreed on a duty to negotiate in good faith in a preliminary agreement. Again, this makes sense as this is really a case of contractual liability. The Official Comments give an example of what the right to performance could mean: ‘such as by directing the parties to negotiate’.  Therefore, the parties could be ordered to continue to negotiate. It is unlikely that the parties could be ordered to conclude the contract, as this would go against the principle of freedom of contract in situations where there is no intention to be bound. Also, account must be taken of the exception provided in art 7.2.2 letter (d) PICC to the right to require performance, according to which, where performance has an exclusively personal character, enforcement would interfere with the personal freedom of the obligor. But, the exception does not apply to obligations undertaken by a company, which is usually the case in international negotiations for complex commercial deals.

Does it make sense to expressly agree to negotiate in good faith in a preliminary agreement in an international transaction? There is no straightforward answer, as it is highly context-specific. Nevertheless, it seems clear that several questions must be made and assessed before making the decision to conclude such an agreement. Some of these questions are (i) what is the nature of the agreement? (ii) what is its content? (iii) who are the parties? (iv) what is the applicable law? and (v) who is the adjudicator? Only after considering the probable answers to these questions will a negotiating party be in a position to conclude a preliminary agreement with some degree of clarity as to its desired function.

Posted by Professor Isabel Zuloaga Ríos (Pontificia Universidad Católica de Chile). Professor Zuluoga is the autor of Reliance in the Breaking Off of Contractual Negotiations: Trust and Expectation in a Comparative Perspective (Intersentia 2019). For a summary of this book click here.

One thought on “Preliminary Agreements and the Duty to Negotiate in Good Faith: Distinctive Features in the International Commercial Context – Isabel Zuloaga”