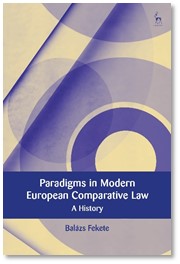 Does it make any sense to study the history of legal scholarship in the 21st century? The answer is not self-evident at all. Our age is definitely fascinated by contemporariness, we are inclined to think in the present tense mostly. In light of this apparent confidence in the present, history seems to be an auxiliary term at best. In addition, the centuries-old methods of historiography have all been doubted and challenged by postmodern authors, so their conventional scholarly value has often been questioned.

With regard to legal scholarship in general, but especially comparative law, this question is even more challenging. Comparative law has always been regarded as the ‘Cinderella of legal scholarship’, since it arrived relatively late into both the curricula of law schools and academic discussion, somewhere around the late 19th century. Further, as comparative law cannot be associated with a traditional field of law, such as for instance tort law or constitutional law, its academic reputation has undeniably never been very high. The lively debates on whether comparative law is a method or an autonomous branch of legal sciences reflected this ambiguity all through the 20th century.

All in all, taking into account the nature of our age and the blurred character of comparative law as a scholarly enterprise, the writing of a (new) history of modern European comparative law is definitely not an easy choice. However, these ambiguities makes it especially interesting and challenging, and both can be important sources of inspiration for scholarly work. I think I was also led by these motives when I began to work on this project almost twenty years ago. However, I should also add that I was definitely not conscious of the difficulty of such an endeavour at the time, which was very lucky, since, otherwise, I would have never started to work on it.

First of all, I want to discuss what my monograph is not. First, it is definitely not a complete and encyclopaedic summary of the history of modern European comparative law. Its ambition is much more modest: it only tries to map and discuss those main ideas that provided a frame for comparative law thinking in a given era. Second, the scope of the book is also limited. It does not deal with all those scholarly initiatives that relied, to some extent, on comparative methods, but it only focuses on such authors who explicitly wanted to improve the conceptual and theoretical toolkit of comparative law, since they regarded it as an autonomous field of legal study. Therefore, such important fields as comparative constitutional law or comparative criminal law are not touched upon at all. Third, this book does not intend to present ‘the’ history of comparative law, written for all eternity, but it only tries to provide the reader with a new vision on this history, so it offers only ‘a’ history of modern European comparative law scholarship. This new vision can and should obviously be discussed, challenged, and amended by the academic community. If it can serve as a starting point for future discussion, its aim is already reached.

The limits of this enterprise are clear, I think. Now, we can turn to the question of why this book may be of interest to legal scholars.

First, because this is the very first attempt at providing a complete intellectual history of modern European comparative law scholarship. Needless to say, many studies have already been published about certain points of this history during the last century, but a monograph devoted to these specific issues has been missing from the bookshelves until now.

Second, in line with the latest developments in general historiography, this book tries to overcome the so-called ‘descriptive linearity’ dominating the previous literature on the history of comparative law. Therefore, the intellectual history of modern European comparative law is not envisaged as a continuous process that leads from one point to another one, but it is (re)drafted with the help and ‘empathic’ use of the ideas of Thomas Kuhn. Basically, I argue that the modern history of European comparative law is determined by three paradigms. These are: (i.) historical and comparative jurisprudence established by such scholars as Henry Sumner Maine or Josef Kohler and dominant until the first decade of the 20th century; (ii.) droit comparé focusing on both the in-depth study of contemporary private laws and the possibilities of legal unification under the leadership of French legal scholars, including Édouard Lambert or Henri Lévy-Ullmann, during mostly the Interwar period; and (iii.) post-World War II comparative law that put the issue of taxonomy of the world’s legal orders into the focus and developed the functionalist method for the comparative study of the law. Here, the names of René David or Konrad Zweigert have to be mentioned in the first place. Furthermore, I also argue that contemporary methodological debates, with special regard to the functionalist-culturalist divide, are not signs of a novel paradigm-shift toward a postmodern and culturalist approach of comparative law, but they imply the spreading of the idea of methodological plurality gradually replacing previous methodological exclusivity.

Third, I also hope that my work has been able to save many previous pieces of comparative law scholarship that seemed to be completely forgotten by the contemporary academic sphere. For instance, it is still striking to read the ideas of Édouard Lambert and Henri Lévy-Ullmann about the necessity of legal unification in our modern world and the role of comparative law in this process – the concepts of droit commun législatif or droit mondial – which they expounded before and just after World War I. Of course, for us in Europe, in 2021, there is nothing surprising in approximation of laws and legal unification, but for Lambert and Lévy-Ullmann these issues were much more controversial, especially following World War I. So, hopefully, the readers will find certain ideas and concepts that can inspire them even though these are definitely not parts of our vibrant contemporary scholarly discussion facing very similar issues sometimes.

All in all, I hope that this brief introduction to a book trying to offer a new approach to the history of modern European comparative law may be of interest to the readers of this blog. Should you have any comments, questions, remarks, or footnotes feel free to contact me at: fekete.balazs [at] tk.hu

Order online at www.hartpublishing.co.uk – use the code UG7 at the checkout to get 20% off your order!