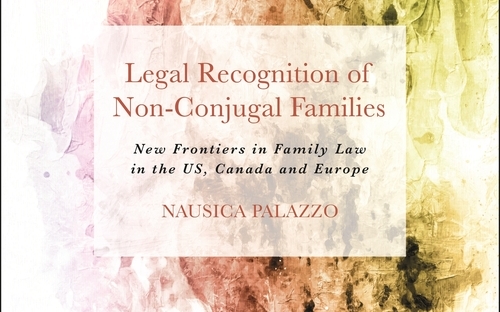 Families eschewing the paradigm of the traditional marital family are on the rise. These include families which lack a sexual component (so-called non-conjugal couples) or who comprise more than two sexual partners (multiparty relationships such as polyamorous or polygamous ones). Despite significant empirical and normative developments affecting the ways in which we do family in the West, law remains focused on the traditional marital family. In my book, I argue that this is a legal problem which needs fixing.

The reasons for this ongoing attachment to the marital family – as the omnibus referent of their economic and social policies – are non-linear. They likely map onto the state desire to police human bodies and reproduction (in Foucauldian terms, ‘biopolitics’). Yet, states were compelled to articulate these reasons in the courtroom, and their reasons are a precious starting point for those who have regard for the recognition of families that do not align with the marital model.

The monograph Legal Recognition of Non-Conjugal Families: New Frontiers in Family Law in the US, Canada and Europe offers an overview of the motives that states in the Euro-American context have offered in this regard. The comparative analysis takes a specific set of non-traditional families as a case study, i.e., non-conjugal families of adult friends or relatives, and covers four jurisdictions: Canada, the United States, the framework of the European Convention of Human, and the European Union. I believe that the comparative analysis can yield a number of benefits. Notably, (i) it can supply the required conceptual tools to scrutinize family policies in the courtroom; (ii) it can offer resources to understand the doctrinal obstacles that prevent the legal recognition of new families and how potentially to overcome them.

The case law review includes both the (few) cases brought by non-conjugal claimants or, more often, claims brought by de facto families or same-sex families. The latter two types of family are indeed the most important vehicle for the ‘modernization’ of family law and for the remolding of monolithic notions of family and conjugality. Court litigation has in fact pushed states into the discomfort of articulating the rationales, aims, and expectations behind their taking or not taking the traditional family as the target of state support.

By way of illustration, looking at same-sex and de facto couples’ litigation, it emerges that Canada would frame the issue (of new family recognition) as a problem of ‘equality’. At the constitutional level, this implies that claimants routinely invoke section 15 of the Canadian Charter of Rights and Freedoms, which prohibits discrimination on certain grounds. Marital status is one of these grounds and has acted as a powerful legal underpinning for the claims of gay and lesbian couples as well as de facto couples. However, the analysis demonstrates that there are some doctrinal obstacles before non-conjugal couples can achieve similar results. Claimants would first need to promote a more extensive interpretation of the ground of marital status, which at present does not seem to protect non-conjugal couples. An alternative route is advocating for the recognition of ‘family status’ as a new (‘analogous’) ground of discrimination at the constitutional level. This different ground is recognized in other areas, namely under human rights codes, i.e., statutes which protect against discrimination in fields as varied as employment and public services.

The two supra-national systems of the ECHR and EU also display a penchant for equality-based arguments. Therefore, also in these two context claimants must couch their claim in terms of discrimination, as the Burden sisters have in 2008. Reference is made to the UK case of the so-called spinster sisters who went all the way up before the ECtHR to argue that they felt discriminated by a state decision to not grant them access to UK civil partnerships. The comparator term, in their case, included all conjugal couples who could formalize their relationship through either marriage or civil partnerships. The Court eventually rejected their claim by finding that they were not in a comparable situation since… they could not enter into a civil partnership due to consanguinity.

By contrast, under US constitutional doctrine, the problem of new families’ recognition would be framed as one engaging liberty, especially if relatives are involved. The US Supreme Court has found that extended families (of relatives) merit constitutional protection under the substantive due process clause. Yet, the case law analysis also sheds light on a second crucial aspect: the unsuitability of constitutional litigation per se as a vehicle for the recognition of a larger set of families in that jurisdiction. The reasons for this unsuitability include the US tradition of liberal constitutionalism, which is averse to claims seeking access to affirmative entitlements.  Looking at this ‘variable’ in a comparative perspective, the Constitution of Canada shares a similar reluctance towards expanding access to public outlays as a matter of constitutional law.  By contrast, European constitutions are more at ease with socio-democratic rights and indeed assume a host of positive duties toward citizens, well beyond the mere protection of negative liberty. I do not look specifically at European jurisdictions but at the EU and the system of the ECHR. The two systems are not domestic but supra-national jurisdictions, which uphold respectively European Union Law and the Convention in the member states. In matters of social engineering, as are those concerning the enlargement of legal benefits to more families, the two systems display a different attitude: on the one side is the European Court of Human Rights (ECtHR), which is extremely wary to act in such circumstances; on the other side, is the Court of Justice of the EU (‘CJEU’) which is more active when it comes to upholding EU law, even when a decision touches upon the financial interests of a state.

As to the state interests that have been put forward to promote the traditional family, they seem to be fairly recurrent across the Euro-American context. Sometimes the interest put forward is the bare preservation of the special status of marriage, and thus of the marital family. Other times, it can be the protection of the best interest of the child. A reference to the best interest of the child is a strategic move which deliberately seeks to conflate vertical and horizontal relationships – despite new families being adult-adult relationships that do not necessarily want to raise children. On the background is a desire to exploit fears associated with the corruption of children.

Other times, the state offers an interest in mitigating the risk of fraud. New families themselves are depicted as a fraud whenever they seek to access legal benefits: individuals in such relationships are not ‘family’, the reasoning goes; despite this, they attempt to game the system to steal scarce public resources. However, I contend that this rationale is conceptually indistinguishable from the mentioned interest in protecting the traditional family: it is just a variant whereby new families are depicted as deceptive, and suspicious because they live outside the boundaries of normalcy.

Morals or tradition are other grounds on which some jurisdictions have upheld the exclusion of new families, especially same-sex couples. Importantly, however, these grounds have less and less purchase in the West. In the US, moral norms were crossed out as a valid state interest in both the Lawrence decision (decriminalizing homosexual conduct) and Obergefell decision (legalizing same-sex marriage).  The two interests are hardly traceable in Canada. Both the Federal state and provinces have not invoked them as valid reasons for excluding same-sex or de facto couples from the protection of the law. By contrast, the ECtHR has proven more deferential towards a member state’s decision to uphold a traditional understanding of family. Yet, the ECtHR has also argued that the interest in the preservation of a traditional understanding of marriage is ‘rather abstract’.  It surely cannot be invoked to justify all unfair outcomes, such as discriminating against children born out of wedlock.  Therefore, it has set limits to a generalized use of this defense.

The veritable constant across Western states is, however, the interest in protecting the public purse. Whenever new families seek to promote their legal recognition with recognition resulting in new outlays for the state, this interest jumps out to halt them. Yet, the protection of the public purse can actually cut both ways. It can profit new families in certain circumstances, namely when private law benefits are at stake, such as post-breakdown maintenance obligations. It seems that when private law obligations are at stake new families could harness this undisputable state interest to argue that a committed yet not recognized family member must take care of them. By contrast, if the state itself is to bear the cost of state recognition the interest in protecting scarce public resources becomes difficult to overcome, with limited exceptions.

To conclude, there are several obstacles standing in the way of the legal recognition of non-traditional families. States have multiple interests in preserving a singular understanding of family ranging from morals to scares public resources. The recognition of these families likely hits many raw nerves of contemporary societies and will constitute an uphill challenge. Therefore, understanding what these reasons are was a necessary starting point and an exciting project.

One thought on “The legal recognition of non-conjugal families in the US, Canada and Europe, by Nausica Palazzo”