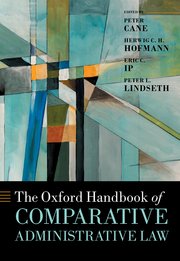 Recent decades have witnessed a flourishing of the comparative study of public law. While private law has long dominated the field of comparative law more generally, this is changing rapidly. For instance, recent years have seen the publication not only of much individual scholarship but also of notable collective volumes in the fields of comparative constitutional law, comparative administrative law, and comparative international law. The Oxford Handbook on Comparative Administrative Law (2021) is intended to expand the field of comparative administrative law (CAL) still further in relation to methodology and in cross-systemic content. The Handbook aims to explore and extend understanding of a broad range of issues of both historical and contemporary import, from the origins of particular traditions of administrative law to the role of information and information management in today’s digitalising legal systems. In so doing, the various contributions illustrate the complex relationships between administrative law and other areas of public law, notably constitutional law and international law. Together, the contributions show how the law governing the exercise of public administrative power has developed over time and in different legal orders, shedding light on the nature and role of public law at national, supranational and international levels. These various orders, rather than being regarded as strictly separated, distinct entities may be better understood as a spectrum of possibilities for exercising and controlling public power. In fact, one of the great advantages of using the angle of CAL for the study of public law is its potential to explore and explain links between different levels of governance in an integrated and dynamic manner.

Like comparative law generally, CAL presents many challenges: pedagogical, methodological, historical, systemic and linguistic, for instance, to say nothing of finding the large resources needed for robust comparative legal research. The Oxford Handbook of Comparative Administrative Law seeks to address itself to such challenges. The volume is divided into several parts. Part I is concerned with beginnings and foundations of comparative administrative law as a topic of scholarly interest. In contrast to a long tradition, developed in comparative private law research, of dividing the world’s legal systems up into ‘families’ such as common law, civil law and others, the historical treatment of CAL in this volume takes inspiration from an understanding of legal phenomena in terms of ‘traditions’ of legal thought. The Handbook surveys various traditions: Anglo-American, French, German, Chinese and Middle Eastern. Chapters on African and Latin American traditions were also planned but, sadly, did not come to fruition.

Part II of the Handbook addresses methodological issues. For centuries, legal comparison has been directed to at least three distinct ends: improved understanding of law by study of similarities and differences between various legal systems and legal traditions; policy-motivated searching for ‘the best law’; and making sense of processes of ‘spontaneous’ diffusion and deliberate transplantation of law from one legal system or tradition to another. The chapter by Mariana Mota Prado in Part II concerns itself with these traditional goals. In other chapters, methodological issues addressed include choosing units of comparison; undertaking comparison between sub-national units within complex, national polities; and comparing legal systems that operate in different languages (or even legal systems that nominally use the same language but with legally significant local variations of culturally-specific meaning). There are also chapters that explore the relationship between comparative administrative law and cognate fields: public administration, political science, and law and economics. Cutting across all these chapters are questions of time and a distinction between diachronic and synchronic legal analysis, discussed specifically by Bernardo Sordi.

Part III reflects one of the Handbook’s underlying assumptions, namely that there are significant relationships between public law, institutions of government, and practices of politics. The chapters in this Part are primarily concerned with this relationship, which is cashed out in terms of types of governmental regimes: parliamentary, presidential, semi-presidential, and authoritarian; and regimes beyond the nation-state. Comparison may, of course, focus on units that display the same or similar regime types. If so, regime-type is likely to play a lesser explanatory role. On the other hand, when the units of comparison manifest different regime-types, the comparison is enriched by paying attention to the possible influence of this factor on public law. This is more obvious in the case of constitutional law, which concerns itself primarily with governmental in the round. It is, perhaps, easier for administrative lawyers to neglect variations in regime type because they focus on only one of the major sets of institutions that constitute governmental regimes. However, there is a great deal of organisational and functional variety amongst executives in various systems.

The chapters in Part IV of the Handbook deal with general concepts relevant not only to administrative law but to public law more generally: the idea of administrative power itself, separation of powers, the rule of law, accountability, the public/private distinction and democracy. Parts V, VI and VII focus more particularly on administration and administrative law, dealing with the creation (‘constitution’) and allocation of administrative power, its functions and its control. There is, of course, no obvious way of categorising administrative powers and their various functions. In the Handbook, one distinction used is that between national administration on the one hand, and supranational and transnational administration on the other. Another is that between rule-making, adjudication and implementation. A third picks out various areas of government activity: regulation, security and foreign relations, and information management. Of course, the choice of these three areas in no way implies that other governmental functions are not equally worthy of comparative study.

In designing the Handbook, the distinction between creation and control of administrative power was utilised more for clarity of presentation and pedagogic efficiency than as an expression of a deeply held conviction about its robustness and significance. Indeed, there is, arguably, a significant relationship between the way public power is allocated and the ways it is controlled, as reflected in Part III of the Handbook. Concerning control, a distinction is drawn between institutions and ‘grounds’ of control. Institutions include legislatures, courts, ‘tribunals’, ombudsmen and auditors. Grounds of control are conceptualised in terms of ‘norms and values of administration’. This nomenclature rests on the idea that control of the exercise of administrative power may be either prospective (‘ex ante’) or retrospective (‘ex post’). It can be argued that this distinction is important for understanding the operation of different modes of control such as ‘checks-and-balances’ (characteristically prospective and preventative) and ‘accountability’ (characteristically retrospective and reparative). Terminology used to refer to the various norms and values of administration is notoriously unstable and variant between legal systems. Here, norms and values are grouped into seven categories concerned, respectively, with (1) procedure; (2) reasoning; resolution of issues of (3) law and (4) fact; (5) substantive ‘reasonableness and proportionality’; (6) openness and transparency; and (7) recognition and protection of ‘rights’.

The landscape of comparative administrative law is still largely a green field ripe for development. The chapters in Part VIII of the Handbook look to the future with an eye particularly on possible advances in methodology and theoretical frameworks. In her final, overview chapter Susan Rose Ackerman concludes by expressing the ‘hope that, going forward, professors of administrative and public law will engage in comparative work that seeks to connect the doctrines of administrative law and the practices of the regulatory/welfare state to democratic values based on transparency, participation, and public reason-giving’.

The essays in this Handbook, both individually and collectively, provide diverse perspectives on large and complex social institutions and practices. There are many other possible perspectives, and the jurisdictional coverage of the volume is inevitably limited. As editors, we left it to individual authors to choose their own points of view, and the jurisdictional focus and breadth of their contributions. In reviewing the chapters they submitted, we found that today’s public law is a field with blurry boundaries. Distinctions between, for example, constitutional law and administrative law or between sub-national, national, supranational and international law remain subject to debate. This is not least a result of the variety of sources of law applicable to administrative action, which include not only constitutional provisions and basic political norms but also substantive, statutory and non-statutory principles, and fundamental individual rights at the base of the legal order, all of which permeate the entire legal system including, especially, its administrative organisation, procedures and decision-making.

The chapters collected in the Handbook offer a multitude of possible pathways to gaining understanding, and reflecting upon possibilities, of CAL research, its origins, traditions and meanings. By using comparative lenses, we offer tools for studying the outcomes of different historic trajectories, structural designs, conceptual definitions, and – sometimes complimentary, sometimes contradictory – modes of thinking about public law and public functions. The book’s contributions also show how much the inter-related multi-level legal systems of the world depend on a firm understanding of ‘foreign’ legal orders. Administrative law is an important tool for regulating the exercise of public power and its comparative study reveals a great degree of diversity in thought about what public power is and how its exercise can be properly controlled.